Accidentally Sneaking into the Hockey Hall of Fame

July 30, 2017
We had just arrived in Toronto that day and, as usual, Angelle had booked an awesome hotel.  We were staying at the Hotel Victoria which is about the best location we could want in Toronto.  After supper at a local restaurant about a block away I suggested that we take a look at the Hockey Hall of Fame.  I did not think that it would be open but I just wanted to see the building and get an idea of where we would go when we visited it the next day.  To our surprise the front door was open so we went in.  Angelle pointed at the champagne glasses but I thought they must just be complimentary water because how could they afford to give out champagne to all the visitors.  There was no one at the door so I thought it must be free to enter.
We walked around a bit and noticed a photographer by the Stanley Cup.  He said that he was just packing up but he would be happy to use our camera to take a picture of us standing by the Stanley Cup.  How could we say no to that?  We got our picture and then wandered around some more.  We were downstairs when a staff member came up to us and said that our limosine would be leaving soon.  We looked at each other and light was beginning to dawn on marblehead.  Maybe there was a special event taking place.  We started to make our way out and another staff member came up to us telling us again that the limo was leaving soon.  Angelle replied that we were going to walk since it was such a nice night.
Not sure whose party we crashed but thank you very much and also to the staff and photographer.  We came back the next day and bought quite a few souvenirs of our visit. 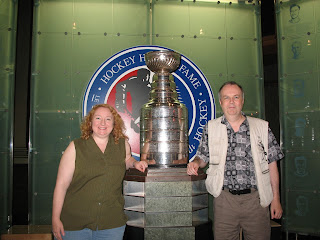 Popular posts from this blog

Quit While You are Ahead

August 14, 2017
Kirk McDougall Ski Jumping. Quit While You are Ahead / Skiers' Denial I like to try many different things.  I guess one of my biggest fears in life is that there may be something somewhere that I have not experienced.  So in keeping with that thought I once took up skiing.  Now this story is really not about me or even that much about skiing so feel free to skip to the next paragraph.  When I did learn to ski I took lessons and practiced on small hills in the city.  It was 15 minutes up the hill and 30 seconds down.  It took a long time to get little practice.  After a while I was ready for the mountains and what I found was that it was half an hour up and half an hour down.  I learned more about skiing on my first trip down the hill in the mountains than my entire practice time in the city.  Who knew?  Well... I guess every skier except for me and the people who told me to learn how to ski in the city. Many skiers I talked to told me stories and one of the common thr
4 comments
Read more

August 07, 2017
Exactly one month after I started to date Angelle, my wife and the love of my life, I asked her "If you could go anywhere in the world where would you go?".  After some kidding around Angelle answered that she would like to go to the Orkney Islands in Scotland.  Well, my name being Kirk McDougall means that I have a wee bit of Scottish heritage so I said "You make the arrangements and we will use my Air Canada frequent flyer points". Angelle immediately went to her Mother and asked "What do I do?  I just met this guy and he wants to take me to Europe". Her Mother gave Angelle some sage advice that she will always remember.  "If you don't go, I will". With that idea in her head Angelle decided to come to Europe with me.  We only had 10 days until we left so all that was available for Angelle to book was a trip to Munich.  We also had no choice but to go first class as those were the only seats left.  It was tough but we soldiered throug
4 comments
Read more

January 04, 2018
In our city on Vancouver Island we still have a local newspaper.  One of the regular items in the newspaper is the "Beefs and Bouquets".  One of my beefs won the number 9 spot in the top 10 Beefs of the Year.  I have copied it in its entirety below. BEEF To the woman who went into the trees in our yard to tinkle. She was undoing her pants as she was running from her car to the trees so it was pretty obvious what she was up to. Does she realize she is next to a 24-storey building with a clear view of her makeshift toilet? At least I hope she was only tinkling. Here is a link to the Newspaper’s top ten Beefs of the Year .
2 comments
Read more

Apps / Games I Have Made

Kirk McDougall
First a little about myself. I am an independant game programmer living on a small island attached to Vancouver Island. I am writing a blog mainly because I have stuff inside me that wants to get out. That would be the stuff that you read on my blog. Why "notabandwagon"? I like think before I do things and I don't ever want anyone to follow me without thinking about it first. If you find something of use in what I say then that is great but it is important to me that you make up your own mind. Don't jump on my band wagon just because it is going by. What about Happy, Healthy, Wealthy? My number one goal in life is to be happy and to help as many others as possible happy. I don't mean every second. I speak in general rules and not in absolutes. Being healthy or wealthy and not happy both sound like a bad situation. My number two goal in life is to be healthy. Wealth without health again sounds like a bad situation. Third is of course wealthy. Wealth can be about so much more than money. So there you have it. The three big things in life Happy, Healthy, Wealthy in that order.